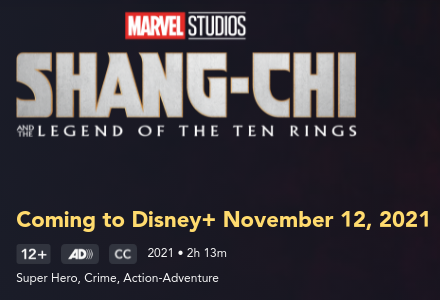 As we this morning, woke up to What If Episode 7, Shang-Chi also finally saw the light at Disney plus. However, the prior rumoured 45 day window for Shang-Chi seems to have been false despide the wide reporting of how Disney “solves” their streaming issues. Apparently, they don’t, starting with the Black Widow incident. That said, there’s nothing to see yet. Instead, for Shang-Chi, Disney/Marvel promises a “Big Surprise” at November 12th, when it is instead releases.

This leads us to Ms Marvel that was originally set to premiere late 2021. As it is now, there not much space left this year for another premiere, since Hawkey also starts streaming in november. Instead, Ms Marvel is now rumoured to premiere february 2022.